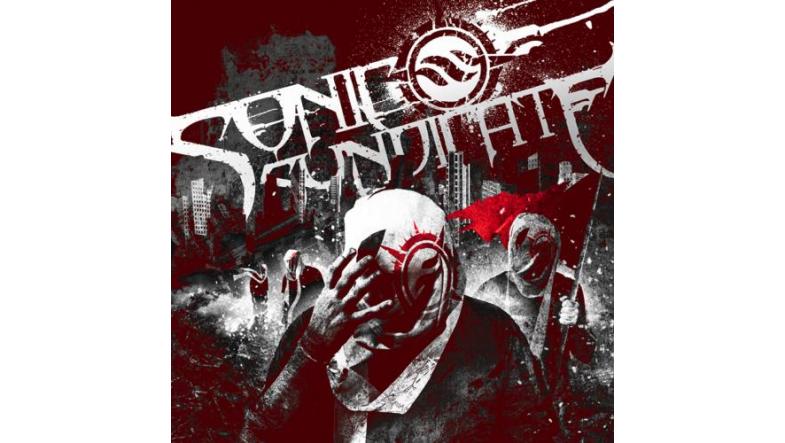 Guitarist og sangskriver Robin Sjunnesson fortæller: "We decided to go with this one as a “Self-Titled" release. Mainly because as an album we have put everything we’ve got into it. All of our experience as musicians, the evolution of the music, the sound from all eras of the band, and also the road we have taken as people. This is us, this is Sonic Syndicate in all its beauty and destruction. It shows our strength, our love for melody, our scars, our energy. The cover art is a definite representation of that. In the background, a battle-torn city laid to waste, four figures emerging together with only each other to depend on in an environment so harsh, only those with a tough heart, body and soul can survive. The tone throughout this album is definitely darker, and as my Swedish family would say “With a red-line running in the middle" so we put this into the colour-scheme. We could not be more proud of this album, and we thank our fans for the support, it's because of them that we’re here. This album is for you."

Forsanger Nathan James Biggs fortæller om dette:     „I'm honored to call Speed a friend. I've been a big SOILWORK fan for years. Those guys were a massive hand in crafting that trademark Swedish sound so it made perfect sense to ask Speed when we knew we wanted to do a song with guest vocals. Performance wise I think we have similar styles and execution, but at the same time we both have our own thing going on so the voices compliment each other to great effect. My idea was also to have a real battle between our vocals. I hate it when you have these "featuring" songs and the guest just pops up for a chorus and then does backing vocals for a while in the verse or something. This is a real fight between us for the mic and I'm sure people are gonna appreciate that.“

LIMITED EDITION BONUS TRACKS:
12. Diabolical Work Of Art
13. What We Shared
14. Another Soldier Down

Soilwork - A Whisp Of The Atlantic (EP)