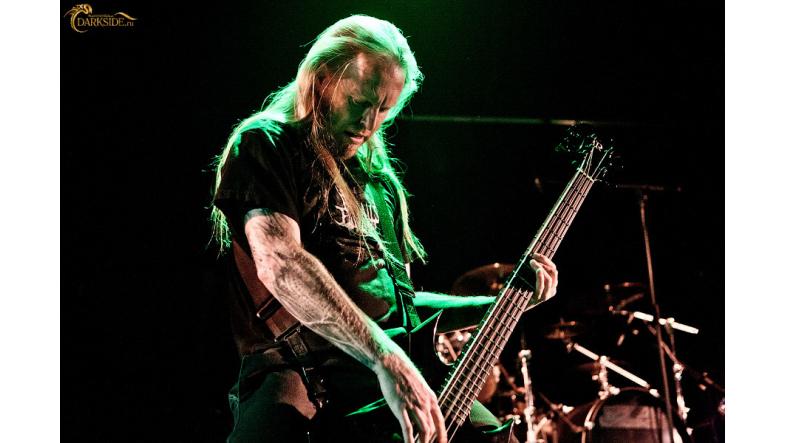 The album cover of …Of the Dark Light shows a different style than your older covers. Does that mean that the music is different too?
No, not at all. You know… It’s interesting, ‘cause when we’re the artist, we’re in control. But when we deal with an artist, and especially with an international artist, it’s not like we’re all sitting at a table, watching what he’s doing and correcting him and changing things. We’re working with Colin Marks, who’s in Iceland, so we’re basically doing emails back and forth, going “hey, this is what we’re thinking. This is what we need”. So when they hand you a piece of work, you have two choices: You can either say “I love it” or “I hate it”. When it came across, we were like “wow, really bright and really blue”, but it still worked. It wasn’t something like “hey, let’s change our style to really colorful, bright things”, you know. We just basically told the concept of the transcending man, where he’s leaving his spirit.

And you will see something interesting in the liner notes. The layout of the album… most CD booklets unravel horizontally and open just like a book. Well, this one… my concept was to have the guy transcending on every page of the CD booklet. So what happens when you slide the booklet out? It unfolds vertically, and on every panel you see the transcending man dissipating more and more and dissolving until there’s nothing left of his whole body.

When I was working with him [Colin Marks], I didn’t tell him to do blue. I said “hey, this is what I need. I need a vertical image, that’s like six panels tall. This, this, this and this”. And when he handed it in, it was exactly what I had described, but with his interpretation – his flavor and his bright blue colors, that I would never in a million years have thought of. So the fact that he did it… I didn’t hate it. Is it different? Yes! Were we trying to be different? Absolutely not! So nothing has changed in Suffocation’s world. We’re still writing brutal, aggressive death metal.

A lot of people are like “oh, they changed their cover, they’re changing their style!”. No, we didn’t. No, we’re not. We’re doing what we’re doing, you know… Things progress. If you just have blood and guts and broken bones on your album covers, then you’re just like everybody else. We don’t think we’re like everybody else. We think we’re different. Of course, if the cover came back bright pink, I think we might have said “hey-hey-hey, buddy, get rid of the pink”. That’s not death metal!

Frank Mullen [lead vocalist] hasn’t been touring full time for the past few years. What’s the live-situation for him now?
Yeah, he’s been like this for a while. Five years ago or something like that, Frank basically came to us and said: “Hey, guys. I can’t do this full time”. And we respect him and what he has to do with his life. Frank is that kind of guy who wants to eat what he wants to eat, he wants to sleep in his bed, he wants to go where he wants to go. When you’re on tour, there’s a lot of times where you’re not in control… It’s time to go to the airport, time to get on the plane, time to get in the hotel, time to get to the club, time to set up for the sound check, time to play – eat this, sleep now, do this and do that. And you know what? Frank… If he could just snap his fingers and be on stage, there wouldn’t even be a problem. He’d be on tour with us. But the fact that you have to sit in the plane, sit in the hotel, eat this weird fucking thing, go here, go there, do this… Frank, he’s 45 years old. He doesn’t want to be told what to do. For me, playing the show is so important, that if I have to eat some weird ass food, I’ll do it. But it is weird when you’re in China and they’re like “here, eat this”, and you’re like “what the hell is that?”.

It is what it is. Frank will still do the studio stuff and he will play the NYC shows. He’ll play any show that’s convenient to him.

Suffocation - ...Of The Dark Light

Fit For An Autopsy - Oh What The Future Holds

Detest - We Will Get What We Deserve