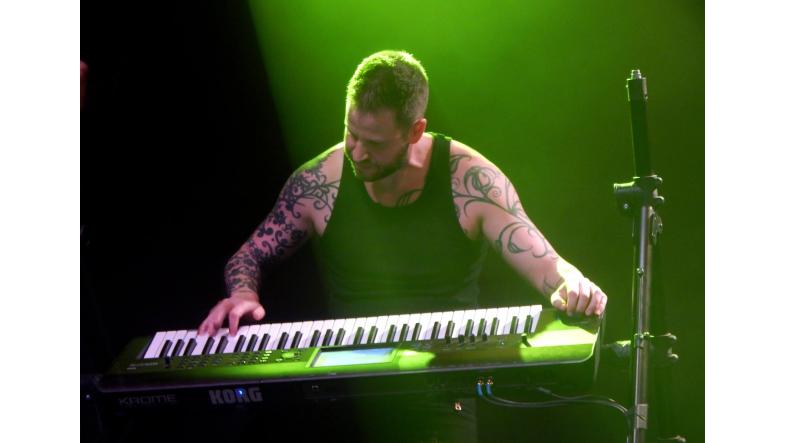 A talk about inspiration and the future.

Recently it was announced that Jonah and long time friend Matt Barlow, would form a new duo, called “Sentinels”.

Carsten: So I am sitting here with magic keyboardist; Mr Jonah Weingarten. Jonah, thank you so much for doing this.

Jonah: Of course Carsten, the honor is on this side of the table. Thanks for having me!

Carsten: So, lets jump to the exiting news already: SENTINELS. You and former Iced Earth/Pyramaze singer Matt Barlow are teaming up together, tell us more about this.

Jonah: I think there are several factors that have led to this collaboration, perhaps three main events. The first being of course the Pyramaze record "Immortal" that we did together back in 2008. We have received so much praise for the ballad that I wrote on that record "Legacy in a Rhyme," that it was impossible to ignore the musical chemistry that Matt and I have. When I was writing my keyboard parts for that record, I took the approach of thinking of his voice and style of singing and what I could do to complement and enhance what he was going to sing as I went along in the studio. When Matt went back to Iced Earth after that record I could sense that we had more to say to the world, but that that time would come later. The second thing was our performance together with him guesting with Pyramaze at this most recent Prog Power USA. We tore it up on stage and received a tremendous response from the audience, which of course got those wheels turning again. The third thing was a series of conversations between the two of us as to how we could share the stage together again and how we could recreate some of the magic from the Immortal album. Matt suggested that we create something new and different that had never been done before instead of just making a new full on metal band. This was very intriguing to me... A musical duo of just vocals and keyboards, or as Matt called it "Heavy Metal's first lounge act."

With the go-ahead to get in the studio and start writing/recording I began to compose a mixture of epic film score pieces and powerful, moving piano based ballads.

This is how Sentinels was born.

Carsten: This sounds super awesome, and I can assure you that a lot of fans are waiting for this! You chose Jacob Hansen for the record. How is it to work with him, both musically and recording wise

Jonah: I'm very happy at the response we received from the fans! The social media response has been overwhelming and I think the fans are going to carry this project on their shoulders. I am so grateful! Honestly, I was a bit nervous about announcing this without a sound clip yet but I have been proven wrong as I guess our past works have made enough of a statement to carry over. Working with Jacob Hansen is just the most natural thing for me to do at this point. Not only are we in Pyramaze together, but we have known each other and have been working together for 15 years now. I think he is the best in the world at what he does, and he is like a big brother to me. I know that any project I get him to mix is going to sound amazing.

Carsten: Coming back to Pyramaze, what is it like to play with these guys. Are Danish musicians different from other musicians from other countries?

Jonah: I love playing with my friends in Pyramaze! I've found Danish musicians to be very laid back and easy to get along with. I’m fortunate to be in a band with some of the best musicians and songwriters in all of Denmark.

Carsten: What is your approach to songwriting? When you hear what, the other guys play, how do you start doing what you do?

Jonah: I approach every song as if it were a movie score. I have so much to say, so much emotion to convey, and so many stories to tell through my compositions. For the songs, they write I add the gravy on the meat and potatoes they send my way so to speak. They just send me rhythm guitars and drums and then I work my magic. I write almost all my parts on the spot in the studio, for example, I’ll hear their riff and just start playing whatever I feel over the part. The spontaneity leads to inspired and passionate additions to the music. When I write full band songs I often make them very melody based (like Back for More from Disciples of the Sun), where the structure of the song is based on a strong hook. They in turn take my ideas and guitar/drum parts and rerecord their own interpretations. This works very nicely and helps create very dynamic records. A lot of bands have one song writer, whereas we have three (Toke, Jacob, and myself). I also really enjoy writing epic film score type instrumental tracks that really help set the mood and break up some of the intensity.

Carsten: Which movie composers are you inspired by then? My first guess would be Hans Zimmer?

Jonah: Absolutely, Hans Zimmer is all over the new (5th) record we have coming out. I also love Danny Elfman, Howard Shore, Steve Jablonski, Thomas Newman, John Williams, and Allen Silvestri to name a few.

Carsten: All good names!
If you could say something to all the young aspiring keyboard players out there who wants to play music, what would it be? Besides practice of course.

Jonah: I actually don’t practice nearly as much as I should! But I would say don't be afraid to be original and unique. Keyboardists are a dying breed as we have been replaced by backing tracks and computers, but they can’t take away our souls!

Carsten: Or our freedom?

Jonah: Tell them... "Scotland is freeeeeeee"

Carsten: Hah!
Pyramazes Disciples of the sun was a great success and quickly became a fan favorite record from you guys. Do you have a favorite track from your entire catalogue?

Jonah: It’s impossible to pick just one since all our records are so different, but I’ll give you one from each record. From Melancholy Beast "Legend." From Legend of the Bone Carver "Souls in Pain." From Immortal, it’s a tie between "Legacy in a Rhyme" and "Caramon's Poem," and from Disciples of the Sun it's the title track.

Carsten: Writing in a studio and performing live are two separate worlds. How do you prepare for a live show backstage?

Jonah: I take a moment and remind myself that this is who I am and this is what I was born to do. That ignites the fire and gets me ready to melt everyone's face.

Carsten: If you could pick any band, dead or alive, to go on tour with who would it be. Name 3 bands for this tour!

Jonah: How about Pyramaze, Sentinels, Malacoda, and Structure of Inhumanity and I’ll just play for 6 hours every night ;)

Carsten: Haha, cool! If you had to pick one of these what would it be and why: a squirrel's bushy tail, or arms like an octopus!

Jonah: Probably a squirrel’s bushy tail to tickle my undercarriage.

Nice! How about a shout-out to all your fans?

Jonah: Thank you all so much for following me and supporting me for all these years! I promise you that the new Pyramaze record and the Sentinels debut will be the most epic things you have ever heard!

Carsten: And on that last note, when will we see the new Pyramaze stuff?

Carsten: Damn. Jonah, thank you so much for doing this!

Jonah: It was my pleasure and thank you so much to my fans over in Denmark and the rest of the world. You are my inspiration!