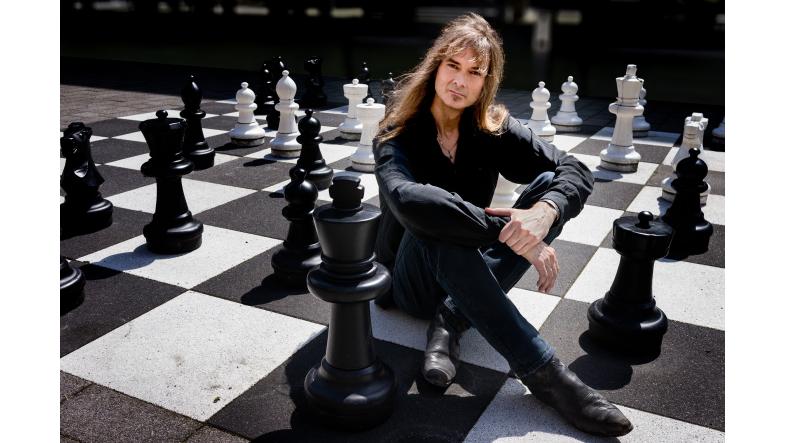 You are just about to release The Source. Can you give a brief summary of the story told on the album?

Well, it’s a bit complex. It’s a prequel to the big Ayreon story, and it’s back to science fiction again. It starts a long, long time ago on a planet called Alpha, and this planet is facing the same problems the earth is facing nowadays. The same ecological and political problems etc. And they instruct the computer, the main frame, which is called The Frame in the story, to solve the problem, and the computer simply deducts that the problem is mankind. Mankind is the virus. So, it decides to shut down all the life systems on the planet, which means that the inhabitants will surely die. The only way to preserve their race, will be to leave the planet in search of another planet. That’s basically the start of the story.

Yeah… And it acts as a prequel to all the other works, right?

That’s correct, yeah. That’s why it’s called The Source. The source refers to the source of mankind, but also the source of Ayreon. The beginning of everything.

But I think there’s kind of an optimistic touch as well, because they manage to unite all these heroes who has their own different perspectives on solving the problem. And actually, it ends with the beginning of all the other Ayreon adventures.

True. This album ends with 01.

Oh, the album. It acts as the conclusion to all the other albums, right?

Laughs. I think the fans can live with that.

The binary code that is the title of the album we spoke of before (01011001), translates to Y. Is that correct?

And that’s also the name of the planet we’re travelling to on this album, right?

What led you to expand this universe, Ayreon? It was a kind of conclusion, but…?

Yeah, right, it was a conclusion. The story was finished and I told everyone, the circle is complete now. I’ve got nothing to add to that. But then I saw the artwork of this guy, Yann Souetre, and he’s got all that amazing, really, really detailed artwork, which ties in very well with my music, I think. And one of the images was the image on the front cover, which is the lady underwater with all the tubes connected. And I saw that image, and I thought… that could be, like, a human being, you know, who’s forced to live underwater, and then I thought, hmm… it could even be a Forever, ‘cause I never showed what the Forever looks like. And then I suddenly got a thought: “What if the Forever race was once human?”. And then I thought, ah, that would be a cool twist to the story, so yeah, it being a prequel, I thought that I could get away, you know, with the fact that I said I had completed the circle.

I think it worked out pretty well! Could you maybe tell a bit more about the Artist, and what he does?

Sure, this time… Usually, you know, when I’m totally finished with the story, totally finished with the music, and even finished with the lyrics, everything… recording… that’s mostly the time when I start looking for artwork. And then I tell the artists exactly what I want to have on the front cover and on the pages inside the booklet. But this time I thought: “Wouldn’t it be cool if I start with the artwork...”. I had a bit of the music already and I knew I wanted to do sci-fi again, but it would give me a clear vision of where to go, if I already had the artwork. And I think I looked for 2-3 weeks on Google Images for sci-fi images, and I saw a lot of cool stuff. But mostly it was just 1 or 2 images that I liked from each artist, but this guy, it was like 20 or 30 images that I liked. So I just contacted him, and he’s a musician too and he checked out my music and he said oh man, cool, I’d love to be a part of this universe. So we really worked together on this. He had a lot of influence on the story as well.

Yeah, and he came with ideas all the time as well. He’s worked on this for a year – he started to work on this more than a year ago. If you look at his work in detail, you couldn’t believe all the little details in his works. So that was a great discovery.

Yeah, I think it’s a pretty unique way of getting inspiration for an album. Not many people can tell they searched some images on Google and then an album evolved.

Laughs. Like I said, it got me a clear vision, and I knew exactly what to do. I only had that feeling twice before with the Electric Castle album and the Human Equation album. Those were two albums where everything came together as well. Not just the artwork, not just the music but also the whole cast of musicians, singers and instrumentalists.

That leads us on to our next topic. Did you know all the musicians before you started recording?

Uhm, no. Who they were going to be? No. The way I work, I start with the music. I start with little fragments. Just little ideas, a pre-chorus, little riffs, little melodies. I record that, and at some point I reach, like, 50 little ideas. Then I listen to them, I throw away half of them, because they are total crap usually, heh, and then usually I have 20 ideas left that I think it’s worth working on. So then I start working, then usually the music inspires me to come up with a story, and only once I have the music and the story, I start thinking about singers, because obviously the singers have to fit the music and the story.

How does the musicians influence the creative process?

Well, the way I worked then, is that I contacted around 30 singers that I think would fit the album, and they can’t all do it. All singers have their own priorities, you know, so it’s always hard to arrange that, but once I’ve got them then… It’s strange, I write the characters on the singers. So it’s not like I have the character of a diplomat and look for someone to portrait a diplomat, it’s the other way around. I have got Michael Eriksen (Circus Maximus), who is a really positive person, really happy, and yeah… perfect for a diplomat. And Floor (Nightwish) always wanted to be a biologist, so she got that. And once I’ve got [the roles and lyrics done], I record all the songs with guide singers, and I had some amazing guide singers this time, that really raised the bar for the actual singers, who were like “Wow, that’s pretty good. I hope I can do better!”. So then I send the guides to the singers, and I always tell the singers that those are the melodies I have in mind, but, “Please, I am a fan of your voice and style, so make it your own. Do everything you want, change anything you’d like”. So the singers definitely have an influence on the final result.

I wondered a bit about the Diplomat’s voice though, because I find the sound of his voice can sometimes be a bit melancholic, but it comes together when you tell it’s also based on his positive personality.

Yeah, you think so? I think it’s very positive. Especially in the first song, when he goes “This is not over”…

Yes, the lyrics are very positive…

But you don’t think his voice is positive?

I guess that depends on the listener then.

So, what is it like to work with so many different professional musicians at the same time? Do they also get to influence each other?

Oh, no, they never meet each other. That would be impossible. We couldn’t have 10 singers here at the same time. Because they would have to be here for a month then. Usually they all come to my studio. This time everyone couldn’t come here to record though, ‘cause let’s face it: This time I’ve got the best singers in the world, you know (laughs). And they all come from big bands like Dream Theater, Symphony X and Nightwish. Of course a lot of them just couldn’t come over.

Yeah, I guess you could almost fill a festival poster with those names.

At last, I’d like to know if you have a message for your Danish fans?